I was 14 and sitting in the gynaecologist’s office, being told a load of words I didn’t understand. She spoke too fast and using too much jargon for me to know what she was talking about. ‘But it’s ok, we can help you’, she said. I didn’t know what she was on about. I walked out of the room with a hospital prescription for tablets that I didn’t understand anything about, and instructions to come back in 3 months time.

I rang mum to give her an update, which went along the lines of 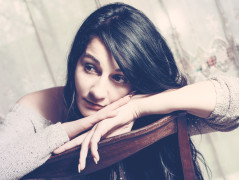 ‘I can’t remember, but she can treat it’

‘oh, with medication I guess’

My mother was less than delighted with this description and wanted to come with me to my next appointment. I didn’t want her there while I was talking about girl stuff though, so I told her not to come. I lay awake worrying about my condition and appointments, “how were they going to treat me?”:“was I going to get better?”; “was I going to be in pain forever?”

I continued to go to appointments and nod and smile in all the right places. I continued to leave with very little understanding of what had been said. I continued to tell my consultant what I thought she wanted to hear. After all, isn’t that what children were meant to do? I had always got into trouble when I undermined adults at school. Yes the medication was working. No, I wasn’t in much pain. Of course I was following her treatment plan to the letter (not that I knew quite what a treatment plan was). As far as she knew, everything was bubbling along nicely.

In my body however, it was not. I was still in a lot of pain; I didn’t understand when and how to take my medication; I couldn’t understand the letters she was sending me and I felt pretty miserable.

As my condition worsened, my ability to interpret ‘doctor speak’ improved. The more I understood of the appointments, the more I wanted to be involved. It got more and more difficult to be told what was happening rather than asked. I think my team had got used to me not being part of the conversation, and no one was giving me a way in. No one wants their body to be someone else’s property. I was tired of the conversations happening over my head.  Being a teenager, the way forwards here were clearly to have a massive strop.

My strop wasn’t, however, just storming up the stairs and slamming the bedroom door. I knew a much better way to wind everyone up; I stopped taking my medication. I became more poorly and my health deteriorated further;  I devolved abnormal growths (cysts) because I was ignoring my care plan.

But if nothing else, I’m stubborn, and I had a point to make. As the doctors grew more worried about me, I stood my ground. I knew it looked like I was being stupid, unfair and unreasonable, but I wanted them to understand. I wanted them to know what it was like to feel completely out of control; to be scared out of your mind and to want to be involved, but have the door closed on you every time you wanted to talk.

Eventually, things got worse and I had to go into hospital for pain relief and to assess whether I needed surgery. This was a wake-up call, and I started to cooperate again.

It’s not surprising though, that this isn’t my most treasured memory. I feel bad for the young person I was; feeling so out of control, so scared, so confused that I made myself really ill. That was part of the reason I got involved in developing the six steps of the ‘Me first’ model .

Just in case you don’t have them committed to memory and rehearsed to perfection, let me walk you through them.

Step 1: Let me know you’re going to listen to me.  For me, going to a hospital appointment on my own was scary. There seemed to be loads of unexplained rules about where to go, how to check in, where to sit and what words to use. In all the confusion I didn’t know if, how or when to ask questions. A ‘hello, my name is..’ and an overview of the conversation could have let me know how the process worked. Understanding that people really wanted my opinions might have given me more the courage to tell them I didn’t really have a clue what they were on about.

Step 2: Why am I here? I think my ideas and my doctors’ ideas on this one were very different. Having this conversation might have let us work out what we were aiming for and get alongside each other in achieving that. It’s hard for a team to win when they’re all fighting different battles.

Step 3: What are my choices? This is an important one. I think if I had been involved in forming my treatment plan I would have more reason to follow it. Medical professionals generally know what the possible choices are; and it’s easy to forget that others might not understand what each choice entails. Had I realised the choice was between medication and surgery, I might have chosen a different way to have my teenage strop.

Step 4: How do you know what is important to me? With all the will in the world, my gynaecologist couldn’t get inside my head. She didn’t know what was affecting me about my condition, which symptoms bothered me most and which kind of treatments I felt I could and could not manage. Asking what was important to me might have allowed me to explain my worries about my condition, so that we could make a plan for these. I might then have spent less nights awake and alone with my worries.

Step 6: What will happen next? I think my mother would have liked me to have more details on this one. It’s really easy to not understand the ‘what’s next’ plan (or to forget the moment you walk out of the room) so making a note of what the plan is on paper of a mobile phone can help in those brain’s-gone-blank moments.

For me, these steps are really important because they represent a way of letting a young person in to the conversation. They’re not going to achieve world peace or cure cancer, but they might mean that a young person like me doesn’t have to lie awake worrying alone. They might allow a child to follow their treatment plan. And they might make for less bewildered mothers being told their child has ‘this thing’…