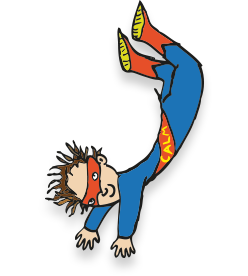 Alison realised that emotions needed to be something a child can see as well as feel, in order to take control of them. By creating Ollie and making his emotions in to super powers, Alison has given children a simplistic but powerful method of deciding what they feel and when.

Ollie and his super powers is so effective with children because it gives them a language to express what’s going on.  Parents can also use this method to help them to communicate with their children. 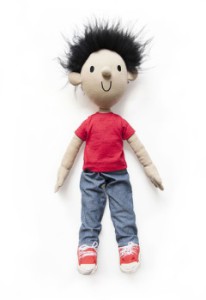 A little boy, age 9, was in and out of hospital. He was very poorly and had to stay in hospital a lot, having to endure cannulas and all the big scary machines, to try to make him better.

He was very anxious about having to go in for tests in case he had to stay in and because he was just generally overwhelmed by it all. His mum and dad were very brave around him but children have a very powerful sixth sense.  It’s a natural survival mechanism. So even though the little boy could not vocalise what he was feeling, he was definitely feeling something. And he sensed mum and dad were not at ease, which made him not at ease.

I used Ollie and explained the concept that inside of us all there is an army of super powers whose job it is to help us get through our days and grow. We have super powers like Bravery, Calm and Happy but we also have Sad, Scared and Nervous. I explained that normally, just like a good football team, they all work together to make him the best version of him he can be. Bravery helps him do new stuff but Nervous is good at making sure Bravery is not too brave or else he might think he could wrestle a dinosaur!

So then I asked the little boy which super power could help them feel better?  Which super power had got him through the last hospital visit? He said, “Well Bravery was good at helping and so was Calm.  They kept him still when he needed blood taking and so it didn’t hurt so much”. We talked for a while about what other super powers could help Anxious and Scared, and pretty soon the little boy had the right team to reassure Anxious and Scared.  The team knew when they had to hold Anxious’ hand and reassure him and give Scared a big hug.

What had I done? I had made the whole thing about parts of the child and the child was put him in control of those parts. In hospital the boy felt he had no control.  Now he had.   I am pleased to say the boy is amazing, not only at how he deals with hospital but how he is helping other kids in the unit and his parents!

Giving children a method of controlling their emotions in this way gives them the choice of how they would like to feel and a method of explaining it to those that need it, in order to help them. Control and choice are two very important parts of feeling safe and allowing a child to be active in decisions about their treatment. Anxiety and stress can be debilitating to our immune system. We can help this by giving them a language to communicate exactly what they are feeling.  The Ollie concept can really help alleviate those anxieties by giving a child back control.

For a more detailed summary of Ollie and His Super Powers check out the link on the Me first resource hub to their video .

Therapist, who realised most therapy is too grown up with big words that children struggle to understand.